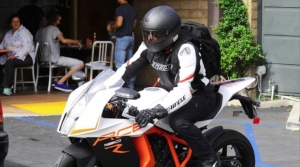 The “American Hustle” star is by far an avid bike-rider. Even though he sometimes drives his cars, Bradly Copper just won’t quit his sports-motorcycles. He was recently photographed riding KTM’s 1190 RC8 street racer, a beast with almost too much power for the road that is designed only for experienced users.

We recently wrote about Bradley while he was driving the G-wagon which he owns. This was pretty weird considering he is by far a bike person. The owner of a Prius and a Mercedes G55, Bradly doesn’t make a big deal out of his cars. So now, seeing him riding this sports-bike has our believes once again confirmed.

And what a motorcycle this baby is. It comes with one of the most powerful V2 engines ever built and one of the best chassis in the world. Even though this 129 kW (173 horsepower) beast comes with a 6-speed transmission, somehow its makers still managed to keep it street-legal. The KTM engine impresses with an extremely broad rev range and spontaneous throttle response, while supplying supreme ride quality.

This incredible machine is by far one made for the bikers that know what they’re doing, no beginners involved what so ever. People who have reviewed it say it requires a certain level of skill and experience, being a motorcycle with no rider aids.

The only thing left for you to decide is whether Bradley Cooper better fits riding his KTM, his silver Aprilia Mana 850 or his red Ducati 1199. One thing is for sure: he’s not a car person.